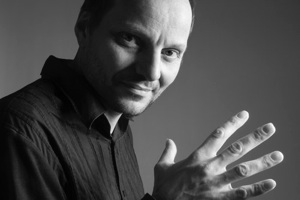 Patrick van Deurzen is a Dutch composer and teaches Music Theory, Instrumentation and Arranging at the Royal Conservatory of the Hague and the Rotterdam Conservatory of Music.

His music is performed by renowned performers as the DoelenKwartet and DoelenEnsemble, Sinfonia Rotterdam, Schönberg Ensemble, Novosibirsk Chamber Orchestra, Latvian and Flemish Radio Choir and New Morse Code in the Netherlands, in concert halls like The Doelen in Rotterdam, Muziekgebouw aan het IJ in Amsterdam and The Philharmonie in Haarlem; and abroad, in the USA, Japan, Brazil, Russia, Germany, Italy, Spain and Czech Republic; and broadcasted both on national and international radio and television.

In 2015 van Deurzen did a Master degree on the research: Referential Networks: Composing and the “Outside World”

At this moment (2017) Van Deurzen works on a new Music Theatre work Mancha, Mancha!, for Henk Neven, Matthijs van der Woerd and the DoelenEnsemble, to be premiered at the Rotterdamse Opera Dagen May 2019; a series of ten Chambermusic works Songs & Dances, that will be premiered in October 2018, and recently he finished Invisible Cities, a New Rotterdam Concerto VI: Cimbalom Concerto for Jan Rokyta. For a short impression of this work: https://youtu.be/i6m4zRLVDls

(highlights; for a complete work-list see All Music)

Wrote for the Aicart festival Cantigas d’amor for tenor and piano (Performed in- and during Porto/Rotterdam cultural capital 2001).

Won in 2002 the 2nd international competition for Choir-music in

The Schoenberg ensemble performed in 2006 Six: a line is a dot that went for a walk.

The Latvian Radio Choir performed his If I were God for Choir, soloists, viola and cello at the fifth choir biennale in Haarlem 2009.

2010 – 11 a music-theatre piece Turris Babel for five female singers, stones, sticks and water is premiered by Wishful Singing at the Noorderkerk Amsterdam and toured through the Netherlands and Germany.

In 2011 his works for solo clarinet and Bass clarinet were released on the double CD – Doubles, performed by the Spanish clarinetist Xocas Meijde.

His orchestra-work Tornado (2011) was performed eight times with success in different Brazilian theaters; a.o. the Teatro National in Rio de Jainero and the MASP in Sao Paulo. Two years later the Novosibirsk Chamber Orchestra gave the Siberian premiere of Tornado, and the Orchestra UniMi in Milan. 2014 Tornado was played in the large hall of The Doelen, Rotterdam and Muziekgebouw aan het IJ, Amsterdam.

In 2012 – 13 a 33 min. new work, De Brief, for Soprano & Theorbo was performed on several historic locations in The Netherlands by Leonore Engelbrecht and Elly van Munster.

2014 A New Blues for Marcel Worms (piano), performed in The Netherlands, Egypt and France; and Three piano pieces for Maarten van Veen, performed in the Doelen and during the Hortus Festival.

2015 Figures from ‘The Garden of Earthly Delights’ for New Morse Code (New York based cello/percussion duo) premiered in June in New York City. During the Red Sofa City Festival (to celebrate 50th anniversary of the Doelen) the DoelenKwartet performed a.o. Seven (2009, rev. 2015).